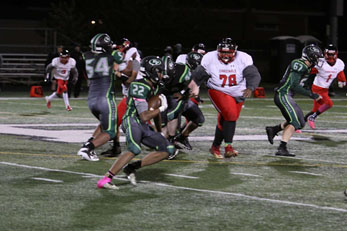 Heading into week 7 of the football season the Mustang Football team was 3-3. The Mustangs needed a win to stay playoff eligible and they did so in the most thrilling of ways. The Mustang Offense started off the game by scoring 13 points in the first half and eating up a large amount of the clock.

The Mustangs D held strong with junior Javon Bynum forcing a fumble and jumping on it, holding the Cardinals scoreless in the first half. In the second half, the offense came out thundering with an 80 yard TD run on a QB keeper by Sean Wilkinson. The defense also came out strong with a key interception by Jack Manso. But the Eisenhower Cardinals didn’t yield, they went on to score 18 points in the fourth quarter. When Eisenhower lined up to kick a game tying PAT,  Mustangs Derrick Chobot blew past his blocker to deflect the kick to secure the victory for EP. Chobot had to say this after the game, “It felt good blocking that kick, but it can’t be the best thing I do all season.” The Mustangs now sit at 4-3 with two weeks to go left in the regular season and heavy playoff implications in both of those games. When asked about these final two weeks Chobot responded, “I feel like I’m going to do my job and trust my teammates to do theirs, if we can do that we’ll make the playoffs.”