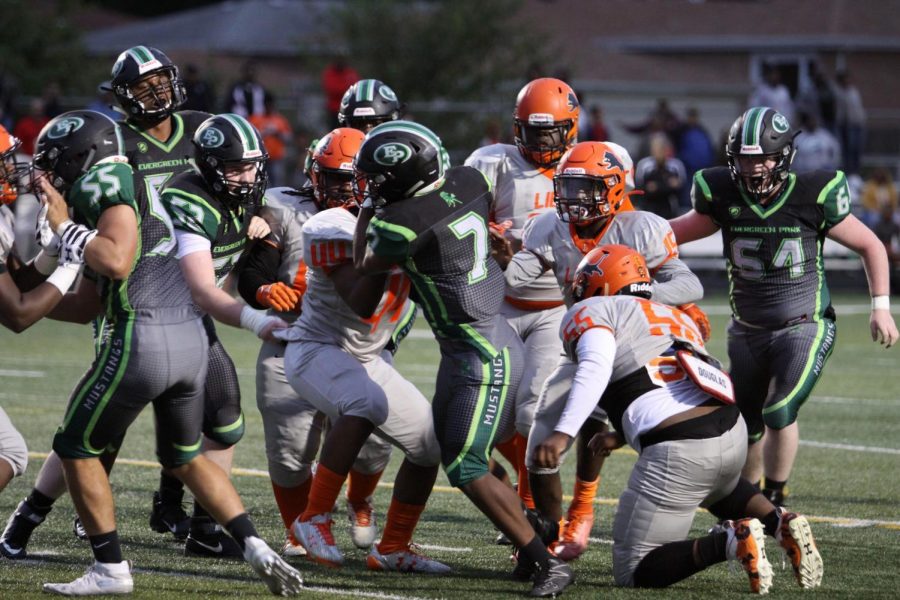 Coming into week two, the EP Mustang football team was 0-1 and looking for their first win of the season. The Mustangs found themselves down early in the first quarter after a turnover and a quick touchdown by Leo. But, that didn’t deter the Stangs from trying to win the game. The offense which was led by sophomore QB Devin Turner, who threw for 110 yards and 3 TDs while adding 60 yards and another TD on the ground, scored 28 points and seemed to be much more proficient than last year. On the other side of the ball the mustangs seemed to transform into monsters with their defensive line, being led by Javon Bynum, Myles Kerwin, Derrick Chodbot, Sean Johnson, and Chris Gatewood, eating up any running back who came their way. The Mustang secondary also forced two interceptions (John Smith and Sean Wilkinson) shifting the momentum in favor of the home team. While talking to Devin Turner he put a lot of emphasis on how the team grew as a whole during practice, “I felt we came together as a team more in practice, we treated Leo week like it was a playoff week.” As the season progresses, Turner’s mindset moving forward is geared towards family, “Work together, play for your brother, play for the seniors and give them your all, and don’t be afraid to fail, you’ll have your brothers to pick you back up.” Your Evergreen Park Mustangs are now 1-1 heading into conference play. Their first conference matchup is the Oak Lawn Spartans.