Dear Evan Hansen: You Will Be Found 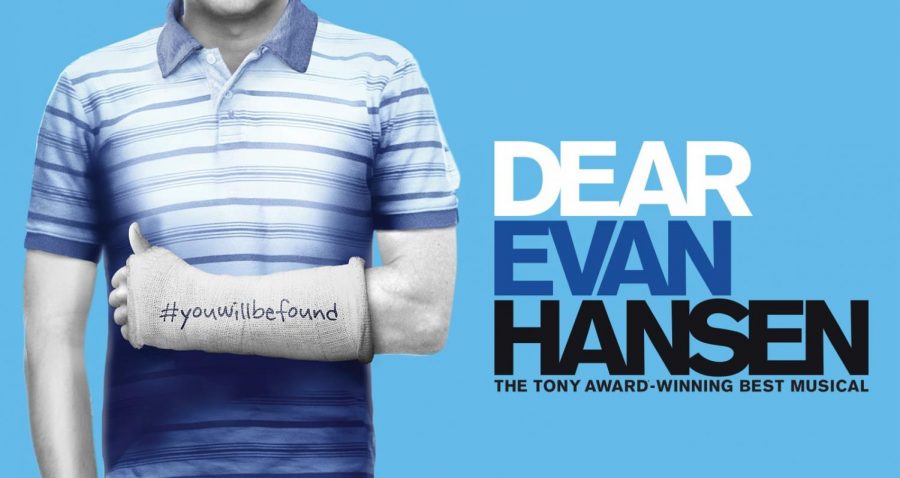 Dear Evan Hansen is a musical written and composed by Ben Pasek and Justin Paul. The plot is centered around a young man named, Evan Hansen who is suffering from severe anxiety. This mental illness prohibits Evan from making any friends at his high school. To help battle this problem, Evan’s therapist advises him to write letters to himself explaining why the day is going to be a good day. Evan reluctantly types out the letter and prints it out for his upcoming appointment. This is when Connor comes into the same room and stops to apologize to Evan for pushing him a few minutes ago. Connor tries to make a lighthearted conversation while signing Evan’s cast. Connor saw Evan’s letter and was about to hand it to Evan until he exploded out in anger about something Evan had said. He then stormed out the room with the letter in hand.

The next day it is revealed that Connor committed suicide. Connor’s parents found Evan’s note and misinterpreted the note as something Connor wrote before he died. They connected this note to Evan and asks the school if they could see Evan to ask him questions about Connor. Due to Evan’s anxiety, he was not able to tell the parents that he didn’t know Connor as well as they thought he did. So, the parents ask Evan to dinner and asks him questions about Connor. This spurs on the events that include Evan making fake emails with a boy named Jared to impersonate Evan and Connor’s nonexistent friendship. Evan then came up with the idea of creating the Connor Project. The project consists of a website showing a video of Evan giving a speech. This speech’s purpose is to have everyone know that their lives are important and they matter. They are not never alone in this world and they will be found by someone if they just reach out for help. This website blew up and people around the school became involved in the Connor project. Some people even said that the project helped remind them that they can be helped.

Unfortunately, everything that goes up must come back down. Evan was at Connor’s house for dinner with the family when things become overwhelming for Evan. The parents were arguing over Connor’s note while blaming each other for not doing enough for him. So, in the spur of the moment Evan had told them the truth. He was never close friends with Connor and his “suicide note” was actually a note to himself for his counselor. The family was devastated and asked for Evan to leave. Evan realizes all things he has done and ashamed of himself and his actions leading up to this point. The musical ends with Evan finally learning through the triumph that he his more than good enough just the way he is. A lesson that applies to all of us and we should all hold dear.