Have You Ever Heard of Hamilton?

*Spoilers in this article* 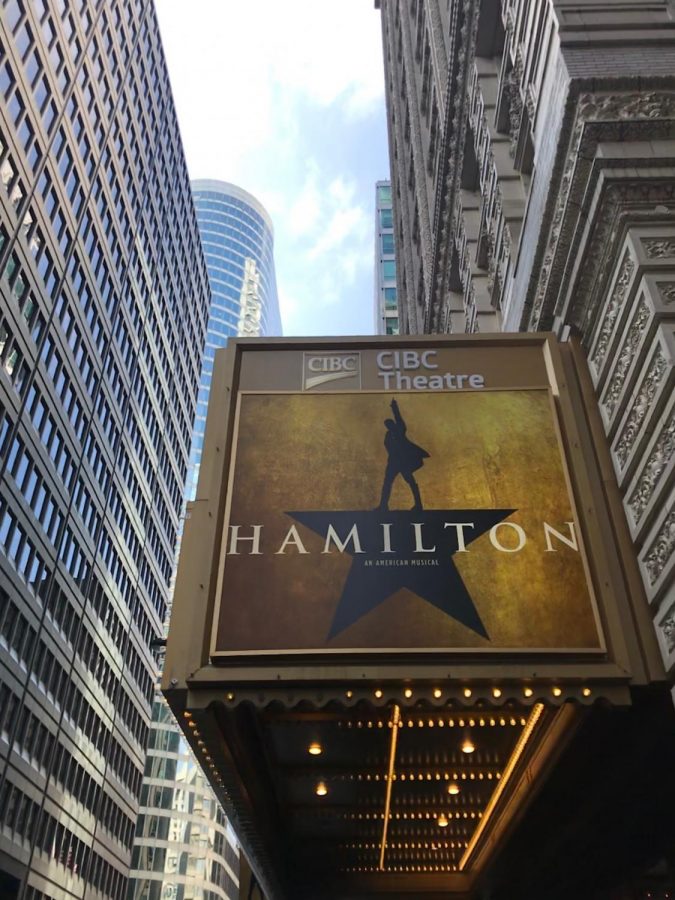 The billboard outside of the Hamilton Show in Downtown Chicago.

Before I became obsessed with Hamilton, I thought musicals were a long play with a very stagnant plot. Accordingly, I never bothered to try to listen to the songs. That mindset quickly changed when I had to sing a song from the musical for choir. Everyone seemed to know the song and the musical itself while I did not.

Have you ever felt out of place in a room because you didn’t know something that was common knowledge? Yeah, not the best feeling. So, I decided to listen to the original version of the song that we were singing. Then, I listened to a few more songs and in a couple of days. Soon,  I had listened to the whole album. Hamilton is a musical written by Lin Manuel Miranda in 2015. It is centered around one of America’s founding fathers, Alexander Hamilton. Throughout this two and a half hour play, you will her version of America’s history through Hip-Hop, R&B, and Soul Music. For example, you would learn that Hamilton had a long-lasting torrid affair with Maria Reynolds while married to Eliza Hamilton. Reynolds’ husband found out about it and used that information to blackmail Hamilton into giving him money to keep his secret. Hamilton begrudgingly agreed and the affair went on for around a year before rumors began to emerge about money laundering. Hamilton thought it would be a good idea to set the record straight by writing the Reynolds Pamphlet. Sadly, this was not true. One may feel that Hamilton is not a trustworthy person because of these deeds. However, Hamilton, it is not possible to relinquish the good he has done for America. For instance, with the help of others Hamilton began the American Experiment to win the Revolutionary War in Yorktown. After that success, he made sure all men had freedom and a better government.

Overall, those who take time to listen to the 46 songs from the soundtrack will learn many things about history. Hamilton is hands down one of the best musicals I have listened to and I was beyond grateful to be able to see the popular musical.